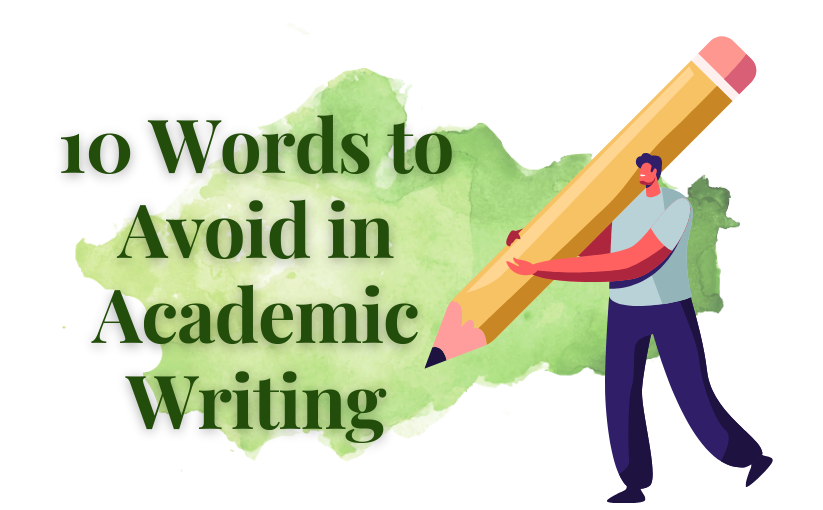 Whether you’re a native English speaker or studying English as a second language It’s easy to fall into the trap of depending too heavily on stock academic words while learning the mechanics of formatting an academic paper.

Yet this attempt to make your writing sound more scholarly might actually cloud your message and frustrate your reader.

These academic phrases are frequently used to help in the transition from one concept to another. True, the use of a transitional word or phrase from time to time is necessary to connect concepts and keep your writing flowing.

It’s also true that professionalism and academic language are necessary to provide your work or research the authority it requires to convey your concepts. Unfortunately, there is a fine line between clarity and redundancy, thoroughness and overwriting.

Such content is viewed as a clear attempt to meet the word count without having to seek additional information. Yes, academic phrases and transition words are used in scholarly writing.

However, there are a few things that should be avoided at all costs. Avoid utilizing the following academic phrases to make your article more enjoyable to read.

The Words to Avoid in the Writing are as Follows-

Well, why say it in the first place if it doesn’t have to be said? Or, if you’re still going to do it, why make the reader aware of the lack of necessity? This statement implies that the information that follows is obvious, assumed, or self-evident. It is comparable to the term “goes without saying.”

Yes, you’ll need to present such information to clarify things and show that you’ve done your research, as well as to establish that you’re an expert on the topic you’ve been given.

However, because you’ll be introducing it anyway, avoid words that will make your following sentences irrelevant. This kind of sentence turn readers off and make it appear as if you’ve just added words to meet the word count.

2. On the Other Hand

Certain sentences in the English language must be put together to make sense. You can’t have one without the other, and the connecting and contrasting words on the one hand…on the other hand are an example of an often misused pair.

Simply said, you can’t use the other hand without first including on the one hand. These academic words may typically be removed from your work, even when used correctly—to contrast connected ideas in support of your argument.

This is a bad way to say that everyone involved did something, was influenced in some way, or is a part of your story. That is not the case. It’s simply not a proper usage of language. When choosing words to use in your writing, avoid using phrases that are incorrect, such as this one.

This is a common blunder made by beginners. In fact, it is one of the most typical errors students make while attempting to make their writing more academic and professional. You’re not only using a clunky phrase when you add “of” after “all.” You’re also using the incorrect term.

The preposition ‘of’ is only required when it is followed by a pronoun, as in the sentence ‘’all of them”. When the next word is ‘the,’ however, the ‘of’ should not be included in the sentence.

4. However, Moreover and Furthermore

Transitional words certainly have a role in the English language, but it isn’t at the start of every sentence. However, moreover, and furthermore can be useful for guiding a reader from one concept to another or connecting sentences to maintain the flow and clarity of your academic writing when used sparingly and effectively.

Is the phrase “first and foremost” truly necessary? Yes, this is a legit phrase that appears in a variety of literary works. When you’re given an essay to write and a word count to match, however, using words like these just makes it appear as if you’ve been slacking and trying to fill the pages with anything.

Don’t get me wrong: this is a beautiful sentence. However, using such a phrase in essays where you must give data and make arguments, is a waste of the reader’s time.

Is it really essential to use both ‘first’ and ‘foremost’ because they have the same meaning? If you want to arrange your facts and make a list, use only one introductory word: ‘first’ or ‘firstly.’ This will be followed by the words ‘secondly’ or ‘next,’ and will most likely be followed by the word ‘finally.’

In order to is a phrase that is frequently used to help inexperienced English writers in understanding or structuring sentences. It’s also utilized by native English speakers who are learning a new language and translating it into English.

As a result, it’s not surprising that it appears in several examples of academic writing. In reality, in order to is an example of overwriting (i.e., using more words than are required) and may nearly always be written simply as to.

7. It is Important to Note That

What exactly is the meaning of this phrase? If you want to stress the importance of anything, you may simply say “importantly.” Instead, you could use nothing at all. Why bother the reader with such lengthy words when the term is merely clunky and your content can do just fine without it?

Prepositions have a habit of appearing in places where they are completely unnecessary.

By using, for example, is a phrase that many authors use without thinking about it. But hold on! Is it really necessary to include that two-letter word? Remove any needless word from your academic writing and write using instead.

This sentence appears in a lot of essays lately. It’s a pompous, newly popular way of saying “more than” or “over.” It distorts the information and broadens the scope, which isn’t ideal for academic writing that relies on research and data.

Adding more filler words isn’t the best approach to improve your word count. The phrase in relation to, which happens in a variety of unfavorable contexts, is another classic example of wordiness. If you frequently use this phrase, try using the prepositions about, to, or with instead, and give your readers a break.

It’s good to want to make your writing look as professional as possible, but too complicated language is sometimes misinterpreted as intellectual. As a result, many academic writers fall into the wordiness trap.

Remember that concise writing is frequently preferable to academic writing and that transitional words aren’t required at the start of each sentence. Consider the alternatives listed above the next time you’re writing a paper; your readers will appreciate it.

In this list, there isn’t a single bad phrase. Many of these, however, are inappropriate for academic writing. Some are overly vague, while others are simply clunky. In your academic writing, try to avoid using these phrases.