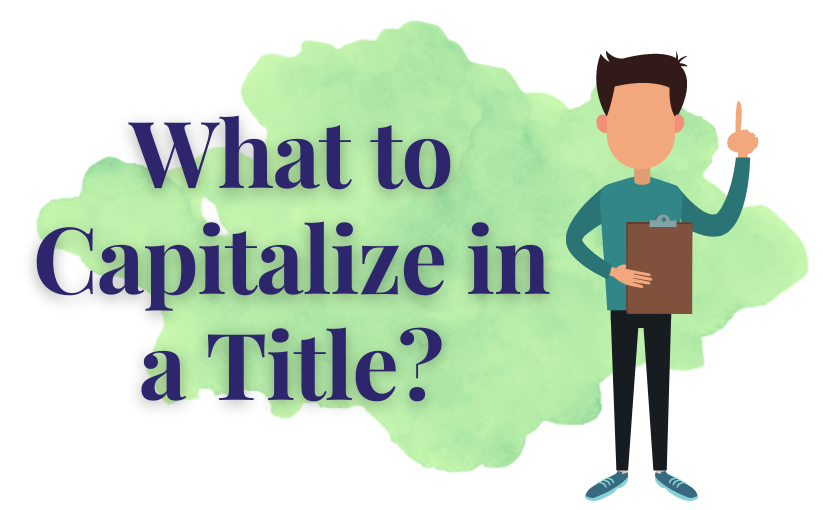 Do you ever come across titles with all of the words capitalized? It’s easy to see why certain authors and magazines might do so. The guidance on capitalization in titles that are often offered is pretty vague, and the rules change depending on the style guide being followed.

Although capitalizing your title correctly might be challenging, there are a few specific rules to follow when it comes to title capitalization. Titles, headings, subheadings, and headlines are all written in the title case.

We’ll go over the guidelines for writing in title case as laid out in The Chicago Manual of Style, a widely used style manual. However, towards the end of this article, we’ll include some resources which go over some of the differences in title case based on the rules of different style guides.

What to capitalize in a Title?

1. The First Word, as well as all Nouns, Pronouns, Verbs, Adjectives, and Adverbs, should all be Capitalized.

Let’s return to the rule regarding significant terms we discussed previously. Though the term “major” may appear to be a little confusing, it relates to all nouns, pronouns, verbs, adjectives, and adverbs.

You should have no trouble finding the terms that require capitalization if you know your parts of speech.

The Grapes of Wrath : Both Grapes and Wrath are nouns in this case, thus they should be capitalized. Because it is the first word in the title, it is capitalized.

The Old Man and the Sea : Man and Sea are both nouns in this context, but Old is an adjective that modifies Man. These terms should be capitalized since they are nouns and adjectives.

2. Capitalization is Not Required for Articles, Conjunctions, or Prepositions

Though it’s often claimed that small words in a title don’t need to be capitalized, let’s be more specific. Even if many nouns and verbs are small (for example, dog, go), they must nonetheless be capitalized. In this situation, the small words we’re talking about are articles, conjunctions, and prepositions, none of which should be capitalized (again, unless they are the first word of a title).

As the English language only has three articles (a, an, and the), finding these words in a title should be simple. Lowercase conjunctions such as and, nor, but, for, and or should also be used.

The Sound and the Fury

Let’s take a look at this William Faulkner example. The words “sound” and “fury” are nouns, thus they must be capitalized. Despite the fact that the word is used twice in this title, only the first appearance of this article requires capitalization because it is at the start. Last but not least, and is a conjunction that should be written in lowercase.

Prepositions, on the other hand, are a different matter since they might be hard to spot. Prepositions are used to connect nouns or other phrases (the prepositions’ objects) to the rest of the sentence.

Simple prepositions, such as above, below, after, around, outside, toward, through, into, and so on, express temporal, spatial, or logical connections between the preposition’s object and the rest of the sentence.

Despite the fact that certain prepositions are extremely long, they should be written in lowercase. (There are a few exceptions to this rule, which we’ll discuss later.)

Bury My Heart at Wounded Knee

In this example, “at” is a preposition that provides spatial information to the sentence and it should be written in lowercase. All capital letters are used in Bury (verb), My (possessive pronoun), Heart (noun), and Wounded Knee (proper noun).

Now things start to become a little more difficult. When used as adverbs, prepositions should be capitalized. (The adverbs near and beneath can be used as prepositions or adverbs.)

3. In a Hyphenated Compound, Capitalize the First Element

The first element of a hyphenated compound must always be capitalized in a title. Unless they are non-capitalized parts of speech, the other elements of the compound are typically capitalized (articles, conjunctions, or prepositions).

Harry Potter and the Half-Blood Prince

Half-Blood is a hyphenated compound in this case. Because blood is a noun, it is capitalized.

If you come across a title with a hyphenated compound that cannot stand alone as a word, the second part of the compound should be put in lowercase (unless it is a proper noun or proper adjective.) Example: Co-owner or Re-elect.

4. Both Elements of Spelled-Out Numbers or Simple Fractions Should be Capitalized

When a title contains a spelled-out number or a simple fraction, both components must be capitalized.

You are already an expert with title case capitalization if you have come so far. So, instead of repeating what we’ve previously learned, let’s move on, folks?

5. If a Scientific Name of a Species is Used, the Second Half of the Name Must be Written in Lowercase

This is one of those picky rules that is quite easy to forget. This rule usually applies to the names of academic publications in the medical and scientific fields. If you’re dealing with a title that includes a species’ scientific name, the second half of the name must be lowercased.

When it comes to title case capitalization standards, the rules described above are general, but make sure to verify the specific style guide you’re using.

Many style guides have created their own standards for the correct usage of title case in addition to formatting. Even while many of these style guides adhere to the fundamental guidelines mentioned in this article, there are significant differences to be aware of.

Remember how we said before that the prepositions should always be written in lowercase? So, let’s look at two style guides side by side to see where the discrepancies are.

A long preposition, such as between, should be written in lowercase, according to The Chicago Manual of Style (8.157). Some style guidelines, however, allow terms with more than five letters to be capitalized (such as the style guide of the Associated Press).

Through capitalizing on your own title might be challenging, we hope that this guide has cleared up some of the confusion over what to capitalize in a title. The majority of the rules are simple, however, some (such as capitalization of prepositions) differ between style guides.