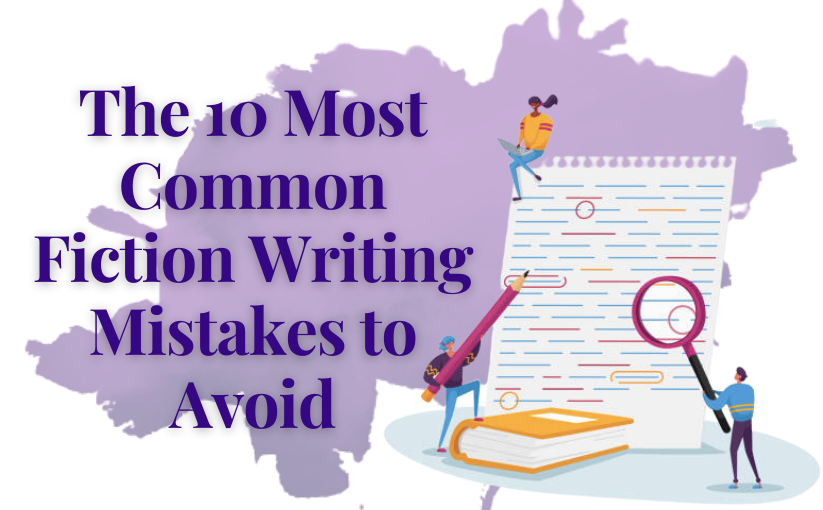 Every writer is unique when it comes to writing. However, errors committed by first-time authors are not uncommon. We asked fiction editors which mistakes they encounter the most often in a highly unscientific poll. The culprits were, predictably, the same.

The most common writing errors detected by fiction editors are listed here, along with simple corrections that may be made during the revision stage. So, if you’re having writer’s block or aren’t sure what’s stopping you from being published, keep reading to make sure you’re not committing any of these terrible writing mistakes.

The List of those Common Mistakes are as Follows-

When it comes to creating dialogue, there are a number of typical mistakes that authors make. It is critical that your dialogue seems natural and not overly literary. Avoid excessively extended conversations that interrupt the action without adding anything useful.

Above all, dialogue should convey important plot information and build the personalities of your characters.

Over-description, over-explanation, and repetitive language can all contribute to wordiness. Editors note this frequently in descriptions, particularly in the use of adjectives and adverbs.

Many first-time authors feel they need adjectives and adverbs to help their nouns and verbs stand out, but this just serves to identify the writer as a novice.

Writers should instead concentrate on utilizing powerful nouns and verbs. Consider the phrase “a small river rushing by quickly.” The adverb is unnecessary since a rushing river will naturally do so quickly.

3. Not Including a Plot:

That’s okay if it’s experimental literary writing, but the formula must be followed in Genre fiction, especially. A protagonist must have a goal that is opposed by an antagonist. In a literary tragedy, the protagonist may be offered chances to change in order to succeed or fail.

Otherwise, the protagonist achieves victory at the end owing to the lessons he learned through his encounters with the enemy. The protagonist’s arc is usually indicated from the start by a flaw that has to be resolved, and we root for him as he learns the hard way what he needs to succeed.

In a short story, success can be suggested after an epiphany, but in a lengthier work, the victorious battle scene should be the most dramatic and rousing portion of the story.

Hope and fear combine to create suspense. We hope the protagonist gets what she wants, even if it’s simply to stay alive. We’re afraid she won’t—maybe she’ll die if she can’t force herself to change, or if she refuses to solve the Whodunit mystery.

Suspense is sometimes killed by a lot of backstories and expository material. We have nothing to be concerned about because the stakes are low. Suspense is weakened by including too much material that is unrelated to the story.

Long paragraphs with no breaks, repetitive sentence structures, wandering away from the current moment of the story, and head-hopping keep us from being emotionally involved.

The importance of pacing variation across a novel could be understated. Peaks and troughs, times of high intensity/action broken by lulls in which the reader can absorb and digest the material, should be present.

Most importantly, there should be a gradual build-up to your novel’s climax; otherwise, your novel will seem flat and the power of your story’s reward will be diminished.

Nothing is more essential than getting words on the page while writing the first draft. You’ll eventually come to a creative halt if you’re continuously self-editing and second-guessing every aspect of your work as you go.

Create two different processes for writing and editing. This will allow you to write more freely and will assist you in overcoming any self-doubt that may otherwise arise.

Except for the openings of scenes, all other sentences should begin with the first sentence indented. In fiction, a scene takes place after a period of time has passed. It’s sometimes like in movies, where a new place initiates a new scenario.

The story may be continuous in time, yet an author may switch to a new scene since the previous scene has been completed. How do you know when the scene is finished?

A scene usually starts with the protagonist pursuing a goal that is made difficult to attain by the antagonist, and eventually, the protagonist fails to complete her task. There would be no need of a story if she succeeds so effortlessly.

Then, as a result of her new dilemma, she must reconsider her next scene and make a decision about how to proceed.

The most popular font used by authors is 12 Times New Roman, with a .05 indented first line and no additional spaces between lines. It is double-spaced when submitting to a class, beta reader, editor, magazine, agency, or publisher.

It’s written this way because it’s simpler to read, and you don’t want to have them work too hard to digest it mentally. It the single-spaced and there’s some font flexibility if you’re formatting it yourself for publication. Set it up to indent automatically rather than manually.

9. Writing all of your Paragraphs of the Same Length:

This isn’t a mistake, but it doesn’t optimize creative options. When this happens, people frequently use the same structure for the majority of their statements. The result might be tedium and boredom.

Change things up to keep us attentive. For a sassy ironic statement, try a one-sentence paragraph. For thrilling action, use short paragraphs, followed by a larger paragraph when things settle down and the characters are evaluating the situation.

If the narrative lends itself, such as a romance or a story with two strong characters whose paths cross, you should limit your point of view to one or two protagonists.

It’s more compelling to tell the narrative from the eyes of the protagonist, therefore choose that approach. It will take more time and effort to recast your story, but it will be more powerful as a result.

Spelling errors and grammatical errors are common writing errors. Other errors in writing include clumsy wording and the use of the passive voice. A piece of writing may also go wrong if the author fails to consider the needs of their intended audience.

Two examples of writing flaws include incorrect punctuation and the use of the passive voice. The use of complicated language and needless words are two more instances. There are many writing mistakes and perfect editing is not always possible if you are not a professional.

You will not have to worry about these mistakes if you hire a good proofreading and editing service. Good editing is all you need to make a mediocre book into a bestseller. If you still do not believe me, then try it out yourself.