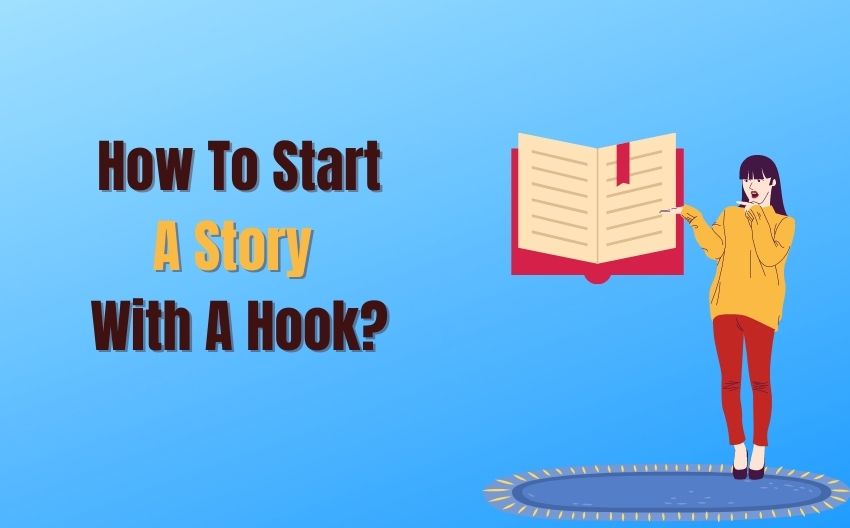 How to start a story with a hook?

When you’re starting a story, you want to arouse people’s interest. When a person reads your text, they should feel compelled to figure out what happens next. Once you’ve gotten the reader’s attention, you’ll have all the time in the world to fill in the gaps with exposition and other story elements.

A novel’s beginning must captivate the reader in this age of instant gratification, short attention spans, and loads of other fantastic fiction to compete with.

Otherwise, readers may consider the book a major DNF (did not finish) — or, if they’re looking at sample pages online or the first pages in a bookstore, they may decide not to buy it at all. So, how can you start a story off right?

Here are a few ideas to write a good hook!

1. Open with a great line or paragraph

While you should revise the entire short story — pull it apart, massage it, and shape it until it’s perfect — It is recommended to give extra attention to the first paragraph or three.

Here are some ideas for making a great start to your short story:

What effect do you want to achieve? In a short story, you only have a small amount of time to make an impression on the reader. Consider your desired effect and how you might start the process of achieving it in your first few paragraphs. Every sentence, every word, should help to achieve that goal.

Grab their interest. One of the key functions of the opener is to attract the reader’s attention.

Imagine your story is being published in a magazine, and you’re up against feature stories about how to win a man or how to please her in bed for the reader’s attention. You need to get people’s attention right away.

Make them curious. You must excite their curiosity, not simply attract their attention, in order to keep their attention and make them want to read more. Make a statement. Raise a question in the mind of the reader. Attract them into your universe.

Maintain the story’s integrity. While the last two criteria are crucial, trying to have a dazzling introduction when your story is more subdued is also not a smart idea.

You’ve broken an implied promise to the reader if you capture the reader’s interest and draw them in, only to have the story turn out to be radically different from the introduction. The beginning sets the tone for the rest of the story. If you don’t stay faithful to the story’s spirit, you’ll be breaking your promise.

Using action to create a dramatic effect is a fantastic way to start. Because an unexplained action produces suspense, the narration is very pedestrian in this aspect. A reader wants to know why something is occurring, and it’s far more rewarding to figure it out over the course of a few paragraphs or pages than to be told straight.

You may start with a fight, the discovery of a body, or a group of people stranded in the jungle, for example. You’re seeking a turning point in a bigger picture. The technique of beginning a story with an action that has no explanation is known as “in media res,” which literally translates to “in the middle of things.”

This intrigues the reader and makes them ponder how things came to be in the first place.

Setting the tone of the book right away — whether it’s one of doom, mystery, mischief, or snark – tells the reader, “This is what the world is like, and you’re now engaged in it, and here we go.”

The first sentence of George Orwell’s iconic dystopian novel 1984 reads, “It was a bright freezing day in April, and all the clocks were striking thirteen.” The reader immediately recognizes that this is both a familiar world — same weather patterns, same terms for months of the year — and a foreign universe.

And by using the number “thirteen,” which is frequently associated with bad luck, Orwell immediately builds suspense and intrigue. He makes it clear that this isn’t going to be a happy book. Things are going to get a lot worse.

4. Don’t get caught up with the exposition

It’s tempting to divulge everything about a character in the first few pages – their backstory, their challenges, their secrets. Isn’t this the best way for readers to get to know them?

However, it is strongly advised against it. Using some of the strategies listed above to produce a more lively initial few pages or chapters can increase the page-turning experience, and you can get to the nitty-gritty character stuff later.

5. Begin in a state of uncertainty

The traditional trope of waking up and having no idea what’s going on is always a fantastic way to start a story. Eliza Fontaine, the main heroine in the novel, The Elizas, wakes up in a bed she doesn’t recognize.

She’s discovering what happened to her alongside the reader — she fell into a pool and is now in the hospital — and it’s apparent that it’s her duty to fill in the gaps in her memory and find out who nearly drowned her.

Because it’s a book about fuzzy memories and jumbled minds, this framework works effectively, and readers can work with her to piece everything together.

6. Finish the first chapter on a cliffhanger

We’ve discussed how to begin the first chapters, but what about how to conclude them? Working in enough cliffhangers to keep readers wanting more is one of the most challenging tasks you have while writing a novel. So, it is really important to end the first chapter interesting, which will compel the readers to continue reading.

All writing rules, including the ones stated out above, are supposed to be broken. They’re just guidelines, so if you have something that works despite the restrictions, go for it.

And always rewrite.  Whatever your first try was, there’s a good possibility it may be improved. Examine the points listed above to see if there’s anything you can do to improve it. Is it possible to put the reader even closer to the action? Are you able to eliminate words that aren’t necessary?

Isn’t it better to use the present tense? Is it possible to improve the dialogue? If possible, rewrite numerous times until you are fully satisfied.

Types of Resumes – How to choose the right type?

Over 1000 customers have rated TrueEditors
4.5 out of 5 on Google reviews and 4.6 out of 5 on Reviews.co.uk.
A Bks
TrueEditors! True! True! True!
My experience with TrueEditors.com was great. I came across their site from the high ratings. And the high ratings proved to be true. Once I got onto their site, I was immediately helped by a TrueEditors.com Rep, a live person, who helped answer my questions and walked me through the process. That was a big plus! And as a first timer, I got a discount or free edit. That was another plus! And the transaction was quick and easy. The turnaround time was also fast, delivery was on schedule and on time as specified. Another plus! My editor was also great and very helpful with comments, notes and suggestions. And when my document was completed and I had to ask a question to my editor, the Customer Service Rep was quick to respond. They escalated the matter so that my question would reach my editor and my editor would give me a reply directly and quickly. And my editor did just that. That was a major plus! Overall, thumbs up on great Customer Service and Editorial service. I would recommend them and look forward to working with them again. Thank you TrueEditors.com!
jammersanger
More than I had hoped for!
Did two jobs with TrueEditors and I'm highly satisfied. In one of the jobs I had some questions regarding their proposed changes and they immediately dug into it and explained why they had chosen certain expressions instead of others and what the differences were. That's really more than I had hoped for! And their chat-people are very alert - and good fun, too!
Jan Goepel
Very trustworthy and extremely efficient
I had an academic document proofread by the TrueEditors team. They not only corrected numerous grammar and spelling issues, they also advised on certain expressions according to my target audience. And the best, they did so over night... extremely fast, extremely good, and trustworthy service. Will be coming here again for the next publication.
Jonathan
Even my tutor can not find these errors
Thank you for editing my document on time. The editor pointed my attention to my commonly made mistakes; missing words, incorrect spelling and grammatical inconsistencies throughout the document.
I was happy to receive both a tracked and a clean version of the edited document.
I will happily recommend TrueEditors to my friends, and I will myself come back on a later occasion.
Reginald Maddox
Excellent Service, Highly Recommended
I have used TrueEditors for several editing projects for my website. They have edited small and large projects for me. TrueEditors offers great pricing with no hidden fees, they always deliver on time and I love the fact that they provide a clean version and a corrected version showing the recommend changes. I highly recommend this company for anyone looking for quality editing services. They have great communications, project completion dates are given when ordered and they have consistently met the deadline. I am extremely satisfied and I will remain a loyal customer.
Eva
Great service, great company!
We are a Spanish advertising agency that work for international companies. Usually we need our copies to be reviewed. We trust TrueEditors for doing this, they are always super-professional and always deliver the documents on time. I recommend them 100%
Dalchen
Improvement in structure, language and formatting
My cover letter was corrected very professionally, with very detailed comments and explanation. Smaller issues like my unclear description were changed shortly in a revision version, with a very smooth communication. I have learned also from the formating. For further CVs I will still consider their service, because the cover letter has to be formulated for specific job description. I don't do massive job application.
Madkin Kelly
Quick 24 hour turnaround
Paper True was quick and effective. I needed a 24 hr turnaround and they provided me edits to my resume that became the talk of the town among my team. Everyone loved how thorough the edits were. Thank you Paper True for helping me so quickly and effectively.
Nora
Aaron is the best editor!
I live in Zürich and needed to have my cooking book "The Food Is Ready" , edited in english before I publish it. So I decided to sent the manuscript to Paper True and I can only tell that I was really impress when I saw the work they did. Aaron my Editor has correct the language and grammar errors. He has done a terrific work improving phrasing and consistency of my book. If you are looking for a serious company I can really recommend Paper True. And "they are allways there available if you have any questions"
Caroline Amstrup
An amazing job!
As a sixteen years old Danish girl I must admit finding the right editor was hard, but I found THE one ;)
Amazing service and a welcoming chat on the website! I love the detailed comments and feedback on the tracked document :) They really did a good job at making my debut novel a lot better while still keeping my style of writing!
Much love from Denmark <3
Read all Reviews