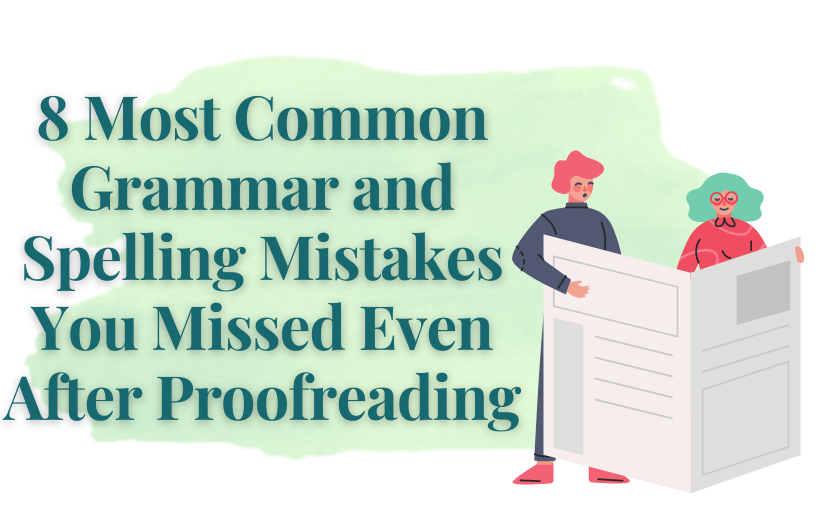 You Missed Even After Proofreading

Grammar refers to the proper use of words in the construction of both written and spoken sentences. It’s essential to use the correct words and how they’re placed together to express thoughts and information. It’s also necessary to have strong punctuation while composing sentences to ensure that the written words express their intended meanings.

Sentences that are punctuated incorrectly may run together or be incomplete. Proofreading is the process of finding and correcting errors in written text. Some errors are evident, while others are more difficult to notice or involve grammatical rules that frequently cause issues.

The Most Common Grammar Mistakes are as Follows-

When a writer picks the wrong word, he or she makes a lot of mistakes. These terms have similar spellings and pronunciations, but their meanings are totally different.

For example, the terms your and you have similar pronunciations and spellings. The word your, on the other hand, is a possessive version of the word you. The term you’re is a contraction made up of the words you and are.

The terms then are spoken and spelt identically. However, then is a comparison expression, whereas then is a reference to a specific time period. Spell-checking software may not identify these errors, but careful proofreading will.

When constructing sentences, writers make mistakes as well. When sentences are written improperly, readers may find it difficult to understand the information and ideas presented. In sentence structure, a comma splice is a common mistake.

The improper placement of a comma to link separate sentences is known as a comma splice. Because both clauses may stand alone as sentences, joining them with a comma is incorrect. A comma splice can be fixed by replacing the comma with a period to create two independent phrases.

Another common structure mistake is the sentence fragment. This problematic clause may appear to be a complete sentence at first look, but it lacks an essential component, such as a subject or a verb. The writer must either add the missing piece or incorporate the fragment into another sentence to fix a sentence fragment.

Always keep in mind who is a subject pronoun and who is an object pronoun. The word to use depends on whether it will be the sentence’s subject or object.

The rules of grammar can be quite severe. However, some writing is more casual, such as email correspondence. This style of writing is more informal, and considerable artistic license is allowed in terms of grammatical rules. A common grammar guideline, for example, is to avoid finishing a phrase with a preposition like of or up.

In order to prevent this, the writer must rewrite the sentence, which might lead to awkward wording. To avoid creating sloppy sentences, some authors will choose to break this rule.

Another common grammar principle is that you should not start a sentence with a conjunction like and or but. While beginning a sentence with the word and should be avoided in official writing (such as an essay or formal letter), it may be an effective technique to draw the reader’s attention in more informal settings.

Consider the audience and aim of the writing while determining whether or not to break traditional grammatical rules. Some grammatical rules and conventions may have to be bent or broken when writing in an informal or colloquial manner.

For authors, deciding between a comma and a semicolon may be difficult. When a conjunction isn’t utilized, use a semicolon to connect two separate clauses. When using a conjunction like and or but, use a comma between independent clauses.

These little guys are frequently overused. As in “Sara’s iPad” and “it’s” for “it is,” apostrophes imply possession or the absence of letters. They have no place in plurals. An apostrophe should not be used in the phrase “FAQs.” Also, it is common for people to make a mistake using their own surname.

If you don’t want to mention everyone’s first name, write “The Johnsons” instead of “The Johnson’s.” Another important point is that apostrophes should not be used in decades. “1980s,” for example, is correct, but “1980’s” is incorrect.

This is a controversial topic, but here’s our two cents. “A person who smokes damages their lungs,” for example. Do you see something wrong with that? You really should. “A person” plainly refers to a single individual. “Their,” on the other hand, is a term you’d use to describe to a group of people. Correct sentences might be written as follows:

“People who smoke damage their lungs “

“A person who smokes damages his or her lungs”

The word “people” refers to more than one person in the first bullet, and it now agrees with “their.” The usage of “his or her” in the second bullet might be awkward, so use one or the other as long as you’re mindful to any gender concerns that an audience might bring.

The way you use commas in a list is determined by the writing style you use.

The Oxford comma, which means putting a comma before “and” when you’re ready to end a list, is also often used:

Make sure you get milk, bread, and eggs from the supermarket.

Even though there are differing schools of thought on whether or not to use the Oxford comma, you must always use commas to separate the multiple items you mention in a list if you want to produce a solid sentence – it’s just correct punctuation.

Proofreading services are in great demand these days, with companies generating more blog content and marketing material than ever before. Simultaneously, the growth of digital material has changed people’s reading and writing patterns, suggesting that the errors today’s proofreaders are looking for are also different.

Similarly, the way brands are expected to write has evolved, so some of the “rules” you believe you know may no longer be applicable. In the digital era, proofreaders and proofreading services are on the lookout for these types of errors mentioned above.