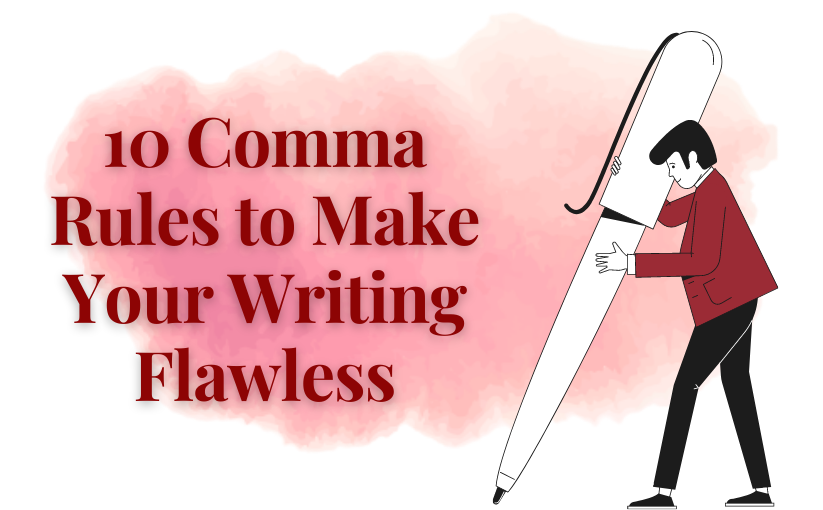 It’s True Comma Rules to Make Your Writing Flawless, commas may be a little mischievous. Comma regulations can be difficult to pin down since commas have so many different uses, and those usage might vary from style guide to style guide. It’s not your fault if your work is filled with them, with the outdated (and misguided) advice that a comma should be placed wherever the reader should pause.

Even if it isn’t your fault, it is still wrong. Don’t be concerned! We’re here to help you. Our list of comma rules will have you writing and editing like a pro in no time, whether you have a specific concern regarding comma usage or you’re staring at a page packed with those pesky things and feeling little overwhelmed.

Comma Rules are as Follows:-

1. A Comma is Required Before a Coordinating Conjunction that Connects Two Independent Clauses

I went to the mall to score new boots, but I failed to find my size.

This sentence’s two parts might be used as separate sentences. Since the coordinating conjunction combines the two sentences into one, we need to use a comma.

2. To Separate Items, a Comma is Used

When writing a sentence with a list of items, use commas to separate them.

John was obsessed with parties, girls, and sports cars.

If you have such a queue, you should separate it with a comma. However, various English styles use commas in somewhat different ways. There is a comma before “and” in the example above.  It’s known as the “Oxford comma,” and it’s optional in some styles.

For example, the AP Style guide for newspaper reporters does not require its usage. The Oxford comma, on the other hand, is widely used in American and Canadian English. As a result, if you’re writing in American English, you should stick to it.

3. To Connect Dependent and Independent Clauses, a Comma is Used

You should not use a comma to separate two clauses in your sentence if one depends on the other and follows it. When a dependent clause appears at the start of a sentence, however, a comma should be placed before the clause it depends on.

You should read more if you’re going to become a journalist. (The dependent clause follows the one it depends on, so no comma is needed.)

If you’re going to become a journalist, you should read more. (The dependent clause starts the sentence, so the comma is needed after it).

4. A Comma can be Used to Break up a Sentence or to Provide Extra Information

Commas should be used to separate any sentences that interrupt a sentence but are not grammatically related to the sentence.

Commas should be used in the case of a nonrestrictive clause that offers information that is not important to the sentence’s meaning. This is the point at which using commas left and right is entirely appropriate.

That man I told you about, who used too many commas, was arrested by the grammar police.

5. After Introductory Words, Commas Should be Used

To begin a sentence, you may require an introductory word (“however”) or a group of words (“on the other hand”). It might be for a variety of reasons, including providing more information or preparing the reader for the main section of a sentence. A comma should be used after such words or groups of words, according to the rule.

Finally, I had enough money to buy this car.

Tip: Adverbs are commonly used as introductory words, and many of them end in “ly.” So, if your sentence starts with a word that ends in “ly,” make sure to include a comma after it.

6. When Using Coordinate Adjectives, Use a Comma

A comma must be put between two adjectives that independently modify a noun. Before you start tossing in commas, you should ask yourself two questions to help you identify coordinate adjectives:

Commas are a fun and exciting type of punctuation.

Commas are an exciting and fun type of punctuation.

Commas are a fun, exciting type of punctuation.

7. To Separate Elements in Dates, Use a Comma

When weekday, month, day, and year are mentioned in a sentence, comma rules advise you to separate them, just like with addresses.

Tip: A comma is also required after the date to distinguish it from the rest of the sentence. You don’t need to use a comma as a separator if your date includes only of the day and month.

8. When a Conjunctive Adverb Begins, Interrupts, or Concludes a Sentence, Use a Comma

This one’s for the semicolon enthusiasts: if a conjunctive adverb is used to begin, interrupt, or conclude a sentence, a comma must appear before and/or after the adverb, not a semicolon (depending on whether it is at the beginning, middle, or end). Consider the following examples.

The company is having serious trouble managing all of these misplaced commas. Further, we can’t seem to stop them from rolling in.

She had always wanted to use a comma correctly; because of her obsession, though, she hadn’t yet figured out how.

He knew that the commas were coming. He never thought that his life was in jeopardy, however.

The conjunctive adverbs are further, though, and however, respectively.

9. Appositive Adjectives Must be Used with a Comma

Here’s another free pass. An appositive adjective is an adjective that follows a noun or pronoun and highlights the description of that noun or pronoun. It’s separated by commas, as you might have already guessed.

The commas, correctly placed and happy, finally found their home.

10. Negations Should be Used with Commas

If your sentence contains a negation, which dictionaries define as “the contradiction or denial of something,” you must set it off with commas.

I went to Barcelona, not Madrid, for my vacation this year.

Tip: Even though the negation comes at the end of the statement, a comma is still needed.

Although we commonly hear about run-on sentences and people who forget to use commas, it is also possible to use an excessive number of commas. Fortunately, there is a perfect and grammatically accurate way to use commas in any written piece. It’s time to say goodbye to your unnecessary commas by following our comma rules.